How to Create a Commute Time Visualisation Map

A commute time visualisation is a map that shows you where you can get to within a certain travel time - for example, a map of all areas that are within a 45-minute commute from home by public transport. This travel time perimeter creates a unique shape called an isochrone.

Commuting is a big part of most people’s weekly routine. Whether it’s on foot, by bike, car or using public transport, we all have travel preferences that impact decision making. It dictates where we work, live or where children can go to school.

The lack of affordable housing in London is increasing the amount of time people travel. Moovit reports that the average commute time in London is 84 minutes, with 30% of London commuters travelling for more than two hours to get to work in the morning. At the same time, the Royal Society for Public Health suggests that lengthy, inactive commutes could be detrimental to health in the long term, causing stress and leading to a higher BMI.

A commute time visualisation map of locations that can be reached by public transport from Manchester city centre if you depart at 8.30am.

This blog will show you how to create a map without using a code, but if you’d prefer to recreate this on your own map, check out:

What is a commute time visualisation?

A commute time visualisation is a map that shows you where you can get to within a certain travel time - for example, a map of all areas that are within a 45-minute commute from home by public transport. This travel time perimeter creates a unique shape called an isochrone.

The history of the commuter map

This is the world’s earliest commute time map, which was created by Francis Galton in 1882.  It shows the travel times in 1881 from London to different parts of the world in days. In 1882, journey times across the world were much longer. As you can see on the map, the key indicates a broad journey time range, such as ‘within 5 days’.

Why use commute time visualisation?

A commute distance map can be used to get a greater understanding of where is reachable within a certain travel time limit. You might, for example, be looking for a new home and want to keep your commute time under an hour. A commute time visualisation would allow you to view all the areas that are reachable within an hour, by different modes of transport and at different times of the day.

The map above shows where you could live if you worked on Wall Street and wanted to commute no more than 45 minutes by public transport.

When searching by distance, a radius map assumes the user can travel as the crow flies. It assumes you can walk on water and walk through buildings to reach your destination. The real world doesn’t work like that. This means that some commute locations are missed when using a radius map. This is because some locations are far away in terms of distance, but are quick to reach due to transport links. Other locations included on a radius map end up being irrelevant because they are geographically close, but difficult to reach.

Commute time visualisations also take into account the time of day you are travelling and the time it takes to walk to the train station or change platform. The image below shows that the suburbs of Savigny-sur-Orge are within a 60-minute commute from Paris, however, it falls outside of a 10 miles radius circle. There are also areas in the bottom left side of the radius circle that aren't accessible within 60 minutes.

How do I create a commute time visualisation?

If you are a developer, you can create your own commute time visualisation tool by downloading an API key and following the TravelTime isochrone API tutorial.

If you aren’t a developer, you can make your own map here in just a few clicks

We’ve included a London commute time map below but it’s possible to create your own in the USA, Canada, Australia, and most of Europe.

The map above shows which areas you could commute from assuming you need to reach Waterloo station in London at 8.30 am and only commute for 60 minutes.

Looking at the 60-minute commute map more closely, we can see that within an hour, there are certain pockets of reachable areas. The image below, for example, shows that Basingstoke can be reached within 60 minutes, but Farnham cannot be reached.

This is because there is a fast train that leaves Basingstoke at 07:17 am and arrives at London Waterloo at 08:01 am.

There is a route from Farnham that can get the user into London Waterloo however it will not get them into the station for the requested arrival time of 8.30 am, which is why it is not shown. So, even though Farnham is closer in terms of distance, the departure time impacts how far they can travel.

The map also reveals areas where the public transport provision could be improved. We can see in the image above, for example, that there are transport links from Caterham, Oxted, Orpington and Sevenoaks to London Waterloo. However, in the centre is the area of Biggin Hill. Biggin Hill is home to a business airport and provides an alternative to main London airports for business travellers. However, at this time of day, there is no provision to get into London Waterloo.

As part of the Mayor’s Draft London Plan, London Biggin Hill has been designated a Strategic Outer London Development Centre (SOLDC). The Biggin Hill Study, published in 2015, agreed that a ‘focus should be placed on improving public transport accessibility’.

Improvements could include an express bus service to Hayes, where commuters could catch one train to London Waterloo East Station.

It is important to remember the reachable area will change depending on the time of day. For example, these two shapes both show where’s reachable within a 60-minute commute using public transport. The blue area assumes the user must be in the city by 7.15am and the pink by 8.30am.

To get in for 7.15am the user has to get to Guildford station at 6.01am to give enough time to reach the platform and catch the train.

The arrival destination can also reshape the reachable area. The two images below compare where is within 60 minutes travel by public transport arriving at 08:30 am to London Waterloo, and arriving at London King’s Cross for the same time. Looking at the two maps we can see that the South West is best served by London Waterloo, and the north of London is better served by King’s Cross.

Changing the mode of transport will also change the commute time visualisation. The below images compare the areas that are reachable within 60 minutes travel by public transport and driving arriving at 08:30 am to London Waterloo.

It is also possible to travel faster by train. For example, there is a direct train from Brentford to London Waterloo that takes 44 minutes.

Driving from Brentford adds 10 minutes to the journey. 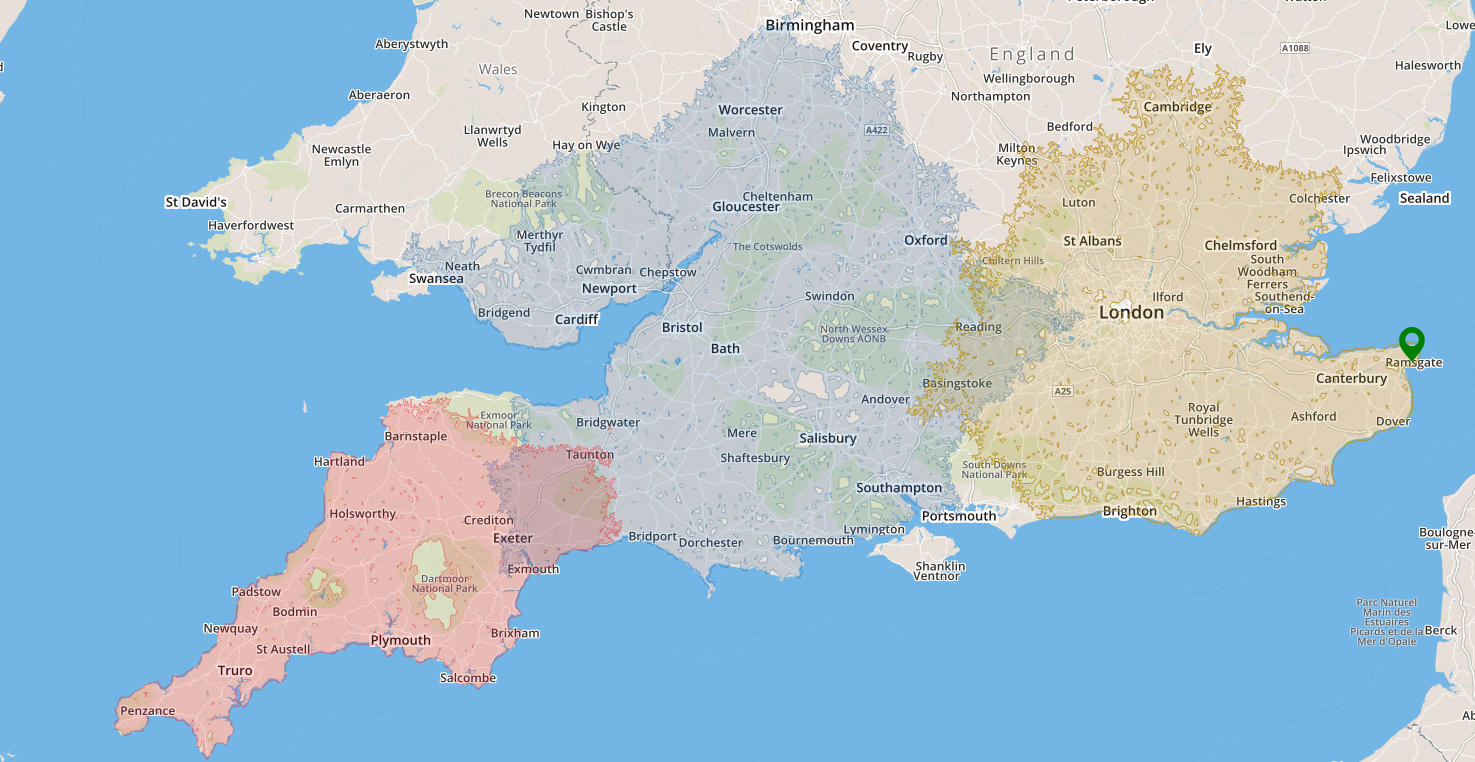 What is an Isochrone Map? A Definition & Examples 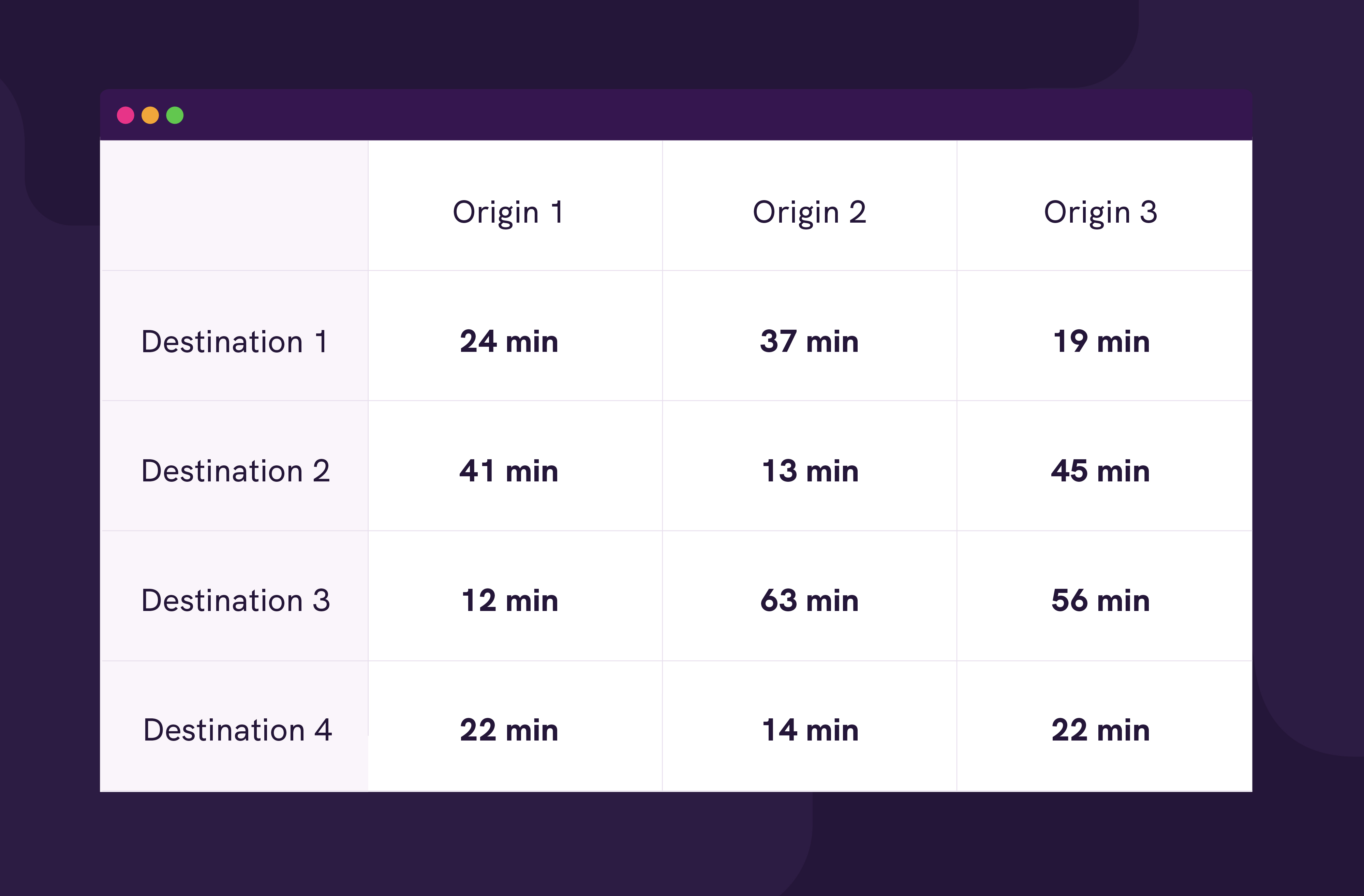 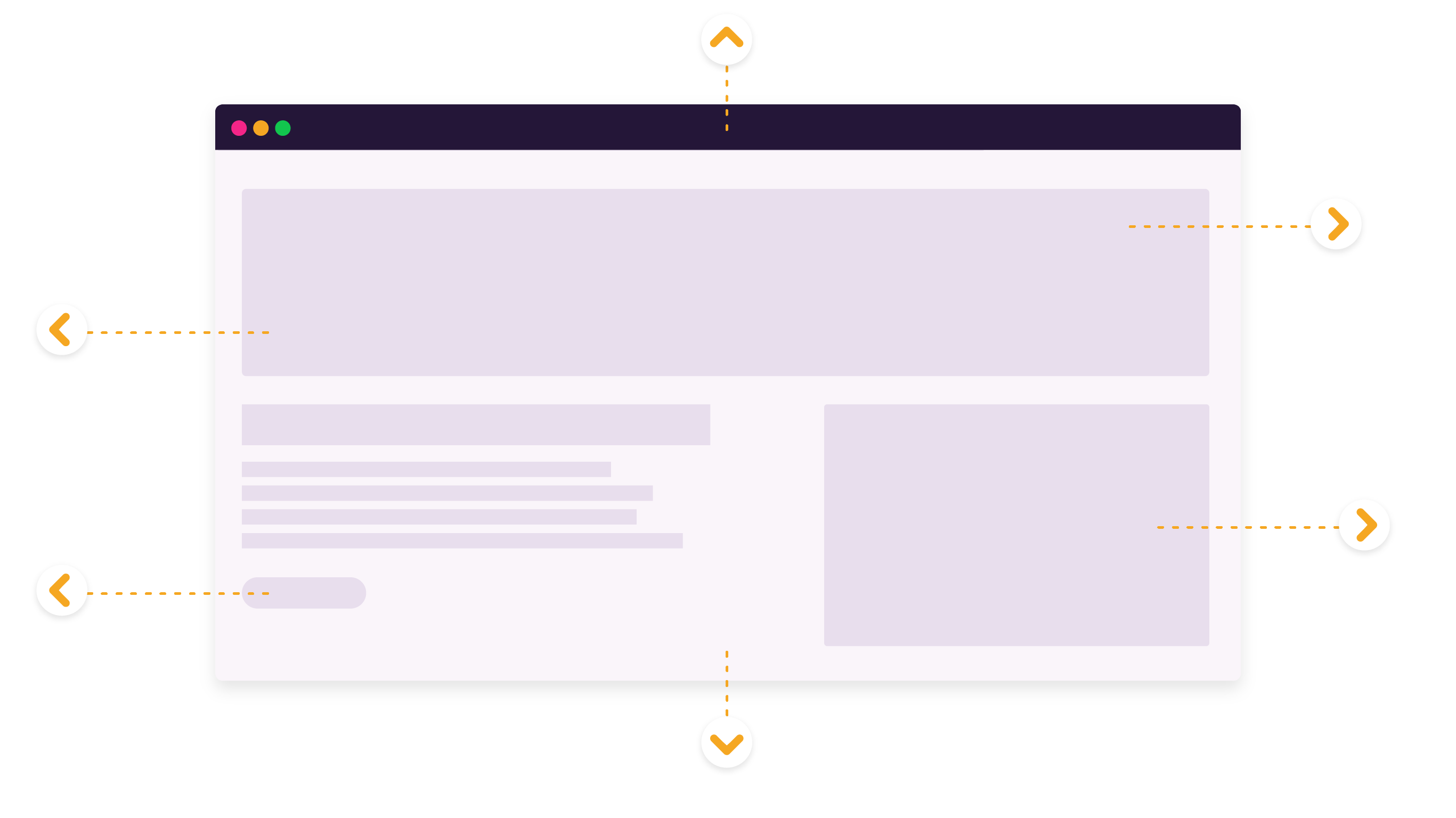 Which travel websites are diverting too many users to Google?

How does the driving model work?

Do you calculate metrics other than travel times?

What modes of transport are supported? 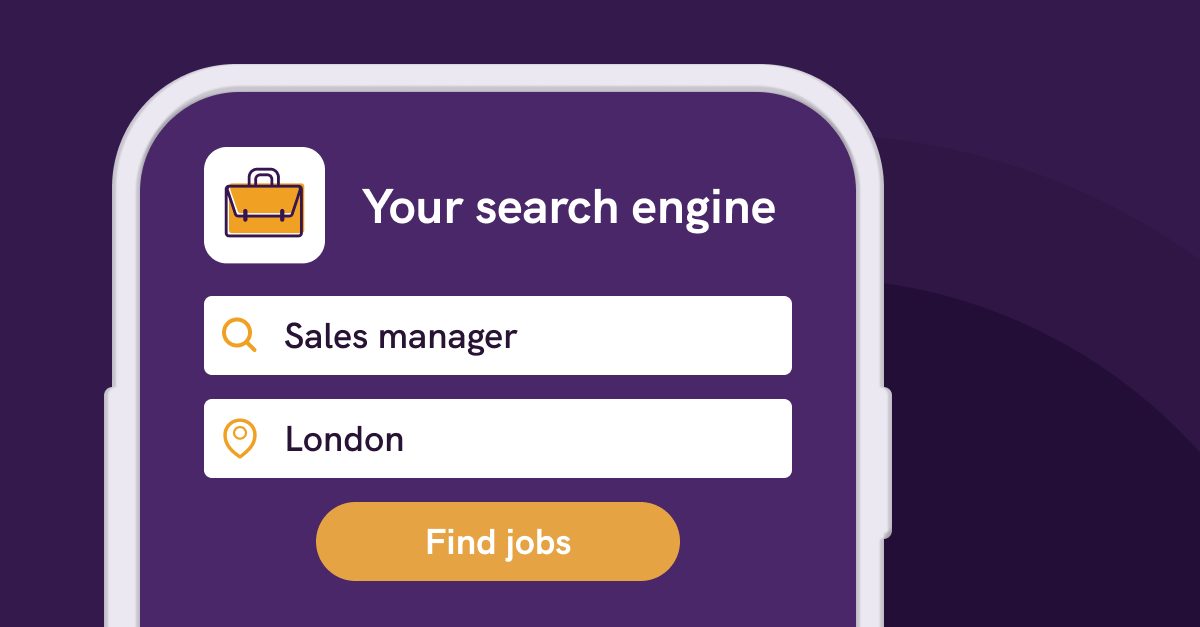 Integrating the TravelTime API was simple and we received excellent onboarding and support from the team.

We were very impressed with the reliability and stability of the API.

The documentation and support from the team are great, and I’ve had no problems in understanding how to use the API.

TravelTime was the tool that stood out: it was the most reliable and the scope of its transport data was broader than any other service we considered.

We have seen our feedback translated into real improvements in the TravelTime product, which is exactly the kind of relationship that we like to have with any technology supplier. 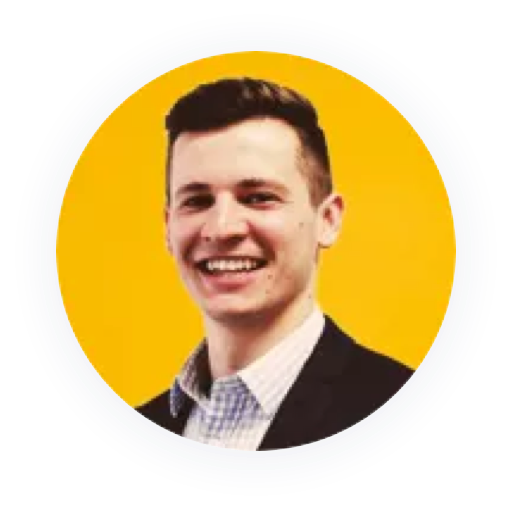 Get started with the API FREE
Sign up to create travel time polygons and matrices instantly.
Sign up